Edith Sibanda, a 63-year-old widow from Luhontshane village, Ward 1 in Tsholotsho district is a champion farmer who won first prize in the conservation agriculture competition and an opportunity to host a field day in her ward; as well as the best farmer category in the small grains section at the 2019 Tsholotsho District Agricultural Show.
She is one of the farmers supported by WWF, ORAP and Agritex under the WWF Germany funded KAZA TFCA in Zimbabwe project with the objective to contribute to increased and sustainable biodiversity management in Hwange National Park (HNP) and its buffer zones; and assist buffer communities to economically and substantially benefit from natural resources.

The project helped her and her family by improving her household food security.  Before getting support from the project, she would harvest about two bags of maize and two of millet on an area that is double the size of the land that she uses now under the project where she now produces 10 bags in total.  She says she could actually afford to sell two bags because she had surplus in spite of the harsh economic conditions and the unfavourable rainfall pattern that was experienced in the just ended agricultural season.

She attributes her success to improved farming methods she learnt under the project which include: correct spacing of the plants, using a ripper, effective use of fertilizer and timely thinning of the plants.  She also dug farrows next to her fields so that they could collect rainwater.

Her advice to other farmers is that they should use early maturity seeds, adopt a ripping system that conserves moisture and apply appropriate fertilizer correctly.

She is very confident about the future.

Says Edith: “Even with the end of the project, I am confident I can still carry on and produce significant yields with the knowledge and support that I received through this project.”

Fifty-three year old Sihle Ncube won third prize in the Ward 1 Field Days competition in April 2019 where Edith won first prize.  She says some of the critical methods of farming she learnt from the project include proper spacing of plants, thinning and spacing of plants and pest control.

She describes food availability in her home as having improved significantly especially since she has 10 children to look after.  She has noticed a huge difference between the harvest of those in the project, which is much higher and better than that of those outside.

“We are very grateful to WWF, ORAP and Agritex and for those in the project, hunger is now a thing of the past,” says Sihle.

Enerst Ngwenya won third prize in the field day competition in Ward 3. He says his productivity has also improved significantly since he started benefitting from the project.  In the past he would produce one to two bags but last year he got six 90kg bags.

He has even been selling surplus from the harvest to pay school fees and take care of other household needs.

Meanwhile, at the Tsholotsho District Agricultural Show, those from the project who won prizes also included Mandlenkosi Khanye who won best farmer in the maize category and Mhlungwa Tshuma from Ward 1, who won third prize in the small grains category.

The project was benefitting 100 farmers who describe the support they received as having helped to harvest more from the land while at the same time conserving the soil.  Several farmers attended the Tsholotsho District Agricultural Show and confirmed that they were now each getting on average 6 to 8 bags of sorghum, more than double what they were getting before. 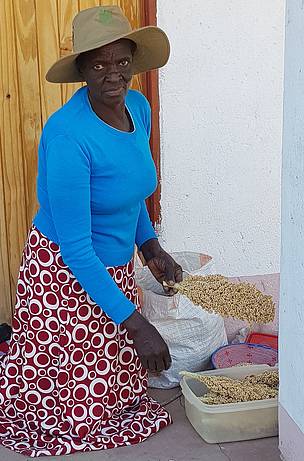